Good news, Chums! This Buster Family Tree has been supplanted by the newer, completer, very much up-to-dater Buster Timeline!

Buster was a monster. Buster the comic, that is, not Buster the character, who was a nice kid. His father, on the other hand, was the monster: the alcoholic, gambling-addicted, spouse-abusing Andy Capp from the same-titled cartoon strip that’s been running in the British tabloid newspapers The Mirror and The Sunday Mirror since 1957. Buster was never acknowledged in the newspaper strip, this proving that Andy Capp was also a negligent and uncaring father. It’s no thanks to him that Buster turned out so well.

Buster lasted almost forty years — 1902 issues — and in an era when British comics regularly absorbed their less-successful stable-mates (much in the manner of a wild creature eating its young, but not in any way similar to the mysterious disappearance of my own long-lost twin brother Mycroft), with twelve kills under its belt, Buster was the absolute champion.

In fact, sometimes it almost feels like Champion (Fleetway, 26 February 1966 to 4 June 1966, 15 issues) was one of the few comics Buster didn’t get its teeth into (Champion belongs to the larger but less pretty Eagle Family Tree).

(Click on the image to see the full-sized version!)

Given its voraciousness, Buster‘s family tree is smaller than might be expected, but it does include some absolute gems — it’s the final resting place of the legendary pioneering comic Illustrated Chips, for one thing — and some great oddities…

I’ve been unable to find an early cover for The Wonder (16 November 1901 to 18 February 1940, approximately 1996 issues) which is why its entry on the family tree seems to show the cover of a different comic! Fact is, it has a maddeningly complicated and obscure history that took me ages to unravel, and I’m still not 100% sure I’ve got it right. It doesn’t help that there was an entirely separate comic with the same name that was in print in the last years of the 19th century. This is what I’ve worked out so far:

The Penny Wonder also has a complicated history, but I’ll spare you that because it’s been covered before on this blog. 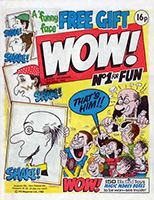 Wow! (5 June 1982 to 25 June 1983) shouldn’t be (and is unlikely to be) confused with L. Miller & Son’s Wow Comics which lasted eight issues from 1948 to 1950 (exact dates unknown). Of those eight issues, the first was unnumbered, then the rest were, in order, #42, #44, #45, #49, #55, #66 and #30. L. Miller frequently started titles at a high number to give the impression that they had been around for a while, and were therefore successful. It’s also entirely possible that this was done because Miller could see into the future and for some reason he absolutely despised comics historians (see also: Alan Class Comics).

As always, the info presented here is to the best of my knowledge at the time of writing, but this is an imperfect universe and mistakes can occur. Do please let me know if you find any errors or omissions!