Having recently featured the first two novels based on Marvel comics — The Avengers Battle the Earth Wrecker and Captain America: The Great Gold Steal — I decided it might be interesting to take a look at a few of the other noncomics in my collection. What is a “noncomic”? Well, that’s the industry-standard term which I just made up that refers to a story-telling medium that’s not a comic-book but in which comic-book characters or stories are presented. Movies are included in that category, of course, but there’s plenty of blogs that cover comic-book-based movies. I want to focus on some more unusual items…

In this almost-perfectly-square (204mm x 203mm) thirty-six-page book (including the covers) the X-Men do glorious battle with the underground-dwelling Morlocks and their leader Callisto.

There are no credits in the book other than copyright information, but the cover tells us it’s “Based on the Blockbuster TV Series!” so a quick search on the on-line internet web revealed that it’s an adaptation of “Captive Hearts” which was season one, episode five of the 1990s X-Men animated show. The episode was written by Robert N. Skir & Marty Isenberg and first broadcast on January 30th 1993. (It was loosely based on “Catacombs” from The Uncanny X-Men #169, May 1983, written by Chris Claremont, pencilled by Paul Smith, inked by Bob Wiacek.)

The story opens with Storm in the X-mansion’s danger room having a little freak-out because her claustrophobia has kicked in. This affliction causes her to doubt her suitability to lead the team. Meanwhile… 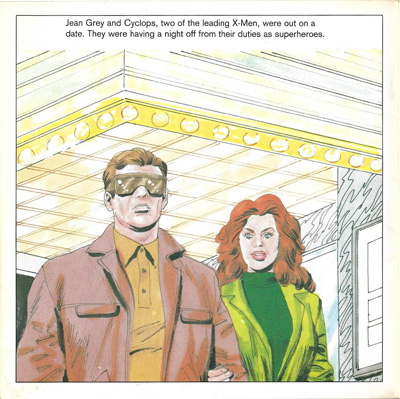 On the way home from their date Cyclops and Jean encounter a green-skinned mutant who’s in trouble for stealing fruit from outside a green-grocer’s shop (presumably he wasn’t able to find a convenient pie cooling on a windowsill), and very quickly — remarkably quickly, in fact — a blood-thirsty mob forms. (It’s as though the people are just waiting around in the hope of encountering someone who is different to the norm so they can attack them. Good thing this is only fiction and not real life, eh, readers? Because that would be a horrible world in which to live. #Heavy-handedIrony)

The mutant flees into a subway station where lots of others of his kind are waiting. Why they just sent him up on his own to nick apples is not clear, especially when some of them look perfectly normal and thus could have simply walked into the green-grocer’s store and just bought the apples.

Cue big fight between the mobs, with Jean and Cyclops stepping in when they realise that the muties are gonna absolutely trash the norms. An old lady mutant hypnotises them into being sleepy, then the mutants’ leader Callisto shows up and orders her minions to take them captive. When they recover, Cyclops’ powers are gone, but Jean still has her handy telepathy and so is able to send a message to Professor X. The X-Persons come running, big fight, etc. But just when they’re on the verge of victory, this happens: 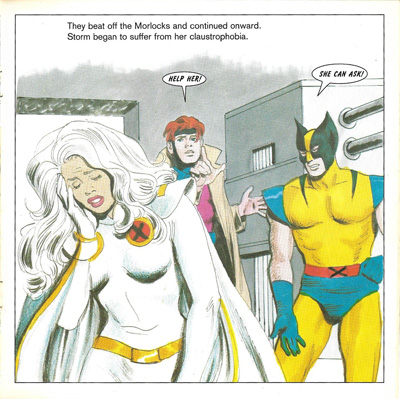 Oh no! Storm’s claustrophobia is kicking in again — hate that! And Wolverine’s being a bit of a jerk, too. Can the X-Men get past this latest set-back and save the day? Yes, they can. And they do. The end.

Rather than simply use frames from the cartoon, the publishers have chosen to have everything redrawn. The cartoon’s character designs have been simplified for the book, which is a little surprising: I’d have thought it’d be the other way around. The action has been toned down a lot, and the book’s somewhat washed-out colour palate makes everything look extra-tame. In most cases, toned-down colours might not matter too much, but here they lead directly to what I think is a pretty serious problem…

Storm (Ororo Monroe) is an African character (from Kenya, to be precise) and one of my favourite comic-book characters. Below is how she looks in her very first appearance in Giant-Size X-Men #1 (art by the much-missed legend Dave Cockrum):

And this is how she appears in X-Men: Morlock Madness alongside her fellow mutants Professor X, Rogue and Gambit.

The art in the book gives Storm a much lighter skin-tone, almost bleaching her skin. I used Photoshop’s eye-dropper to sample the characters’ skin colours (using the “11 by 11 Average” option to get a fair sample)…

The right-most block is Storm’s skin colour from Giant-Size X-Men #1. I’m not saying that this is deliberate white-washing, but given that there are very few good comic-book role-models for non-Caucasian readers, I think the publishers should have tried a lot harder than this to accurately represent such an important and prominent character.

One small consolation is that on the cover (which looks like the work of a different artist again) Storm’s skin colour is closer what it should be.

Below, the book’s version is considerably more tame (and Storm’s skin-colour is really washed out in this one!).

The inside front and back covers contain profiles of nine X-Men characters (Professor X has been included twice: presumably he used his psychic powers to influence the book’s designer).

It’s a handy guide to introduce new readers to the X-Men, though it might be a tad confusing that Cyclops and Jean Grey don’t wear their costumes in the book, and The Beast and Jubilee don’t appear at all (I’m guessing that they’re in other books in the series).

Have to say, it’s great to see some proper X-Men artwork after this book’s rather loose interpretations — just a shame it’s not coloured.

Appropriate for a kids’ book, there’s also a useful glossary of terms that younger readers might not have already encountered, such as “Adamantium Claws” and “claustrophobia” and “telepathic.”

It’s all very light stuff, clearly aimed at five- or six-year-old kids more familiar with the popular X-Men cartoon of the time than with the comics. But even so, I can’t imagine many young X-Men fans being too enamoured with this book. It’s just too tame. I don’t know much about the cartoon and have never watched an episode, but the clip on YouTube from which I snagged image above suggests that it had more bite to it than the book.

Still, it’s an interesting curiosity, but really only for very dedicated collectors, or to purchase as a joke gift for a spouse whom you know is a big fan of comics (which is how I came into possession of my copy — thanks, Leonia!).

Update 20181202: The ever-helpful Lee Grice has informed me that the artist for the interior of X-Men: Morlock Madness is comics veteran Grey Morrow. A quick search on-line has revealed some of his original artwork on an auction website, including some pages from Morlock Madness. Here’s the page that shows Storm getting rid of Slyme’s slime: it proves that the original colours were indeed washed out a little in the printing process… but only a little. Storm’s very pale skin colour was definitely the artist’s choice. 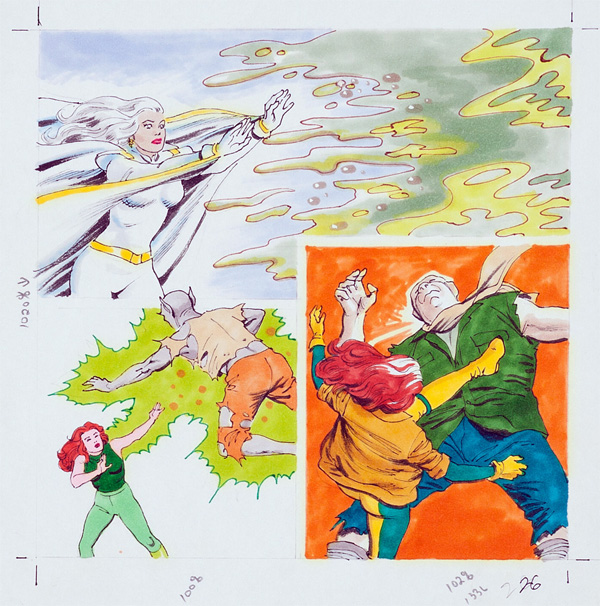 A World Of Ideas