This 1985 paperback book opens with a warning: “Do not read the pages in order. If you do, the story will make no sense at all.”

Ah, the noble “choose your own adventure” experience! Game-books like this were all the rage back before we had convenient interactive electronic entertainment. The book looks like a proper book at first glance, but in fact the story is broken down into lots of little chapters — roughly one per page — and at the end of many of those chapters the reader is given the option of where to go next. “If you want to steer away from the treacherously crumbly cliff edge, turn to page 87. But if you want to leave the European Union, go to page 162.” That sort of thing.

Written by Andrew Helfer and illustrated by José Delbo, Superman: The Man of Steel is the first of four “Super Powers Which Way” books published by Simon & Schuster in the United States in 1983, and two years later in the UK by Carousel. The others in the series focus on Supergirl, Justice League and Batman. A Wonder Woman adventure was apparently planned, but never released. 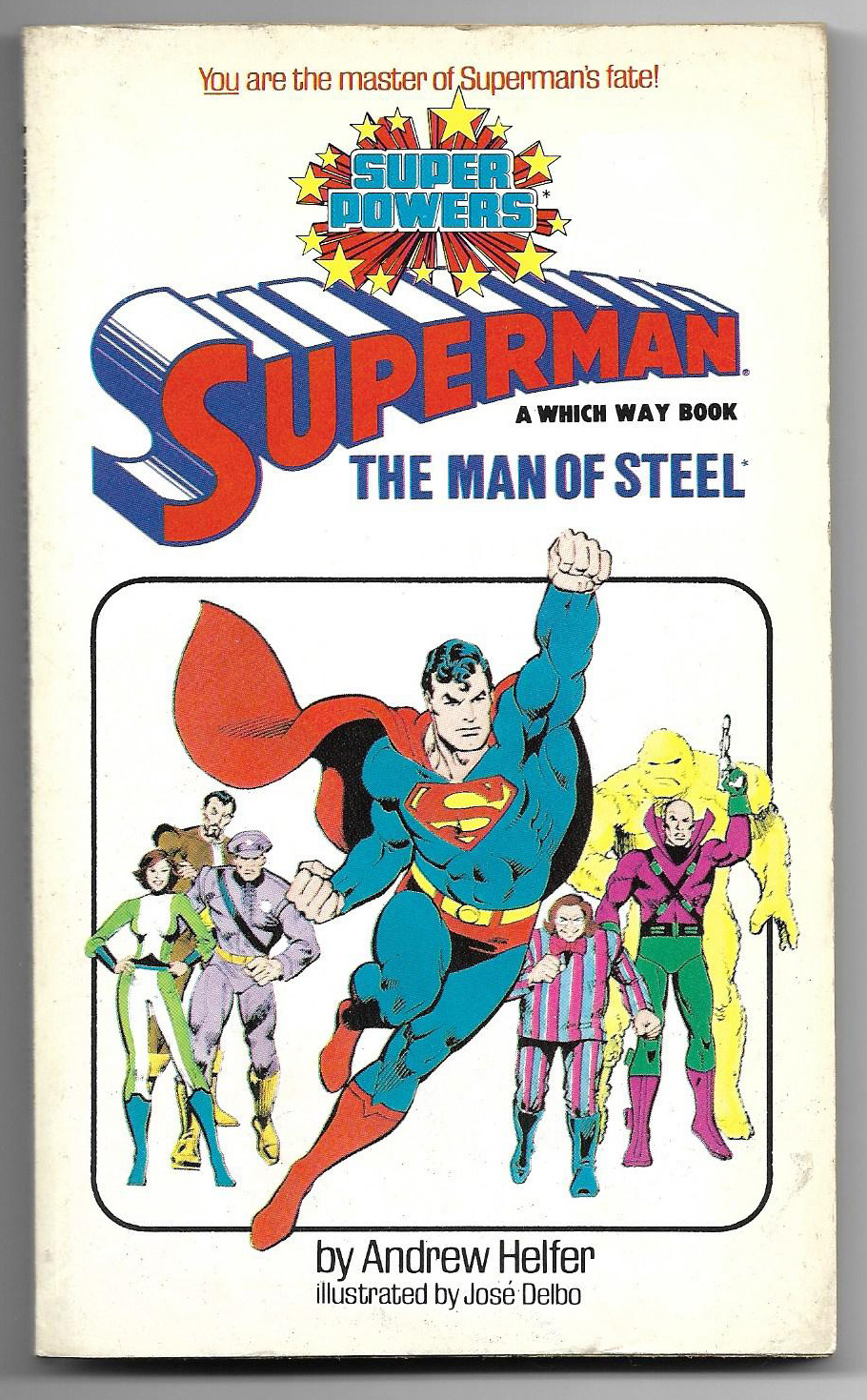 Time for a confession: I’ve attempted quite a few of these adventure books but only ever completed one or two. With most of them I either got bored or managed to completely confuse myself and just gave up. And even though I bought Superman: The Man of Steel many years ago, I never bothered trying it out.

But for the purposes of this review I decided I’d really give it a proper go. And I’m going to document my progress in pretend real-time so it’ll be almost like you’re living the adventure with me! A bit like when younger people play a video game and stream it on-line for other young folk to watch, the modern equivalent of back in the early 80s when we used to go to the arcades just to watch people who had money playing Defender.

But first, here’s the back cover so you’ll know what you’re letting yourself in for…

In the 80s certain companies tended to be a little too enthusiastic about enforcing their trademarks and this is very evident here, where even the blurb at the top receives an asterisk to direct the readers towards the copyright notice (I’ve seen worse examples, and will be pointing out a particularly horrible one in an upcoming* Noncomics feature). It’s actually a bit confusing because the publisher has also chosen to add asterisks to the prices down at the bottom-left: a reader not paying enough attention could easily get the impression that Superman’s “single bound” was only the recommended price.

As you can see, my copy of the book has had its UK price scratched out, an odious but sadly common practice among purveyors of second-hand books and for which the seller should be rightly ashamed. And shot.

So, are you sitting? Comfortably? Then let’s go…!

Page 1. Superman, that legendary super man, is flying over that great metropolis known as Metropolis, but today there ain’t nothing going on but the rent. We’re invited to turn to page 2.

Page 2. Since this seems to be National Crime-Free Day in Metropolis, Superman wonders whether he should check out another city, or call it quits and go back to his other job, reporting for the Daily Planet newspaper. We readers are expected to choose for him… Now, look, I’m just not qualified to make decisions like this! What if I get it wrong and someone gets hurt?

I shall leave such decisions in the hands of the fates… I shall toss a coin! And I know exactly which coin to use, too…

This is the oldest coin in my collection. That’s Caesar on one side, and a jug, two snakes and an axe on the other. So I reckon the best approach is if the book gives me two options, then Caesar’s head will represent the first option, and jug/snakes/axe will be the other one.

So… first flip comes up jug/snakes/axe! I have to turn to page 4, which is the “flying to another city” option. Bear with me a second, because I have to stop typing so I can turn the pages.

Page 4. As Superman is flying across the country he encounters a monster (the large yellow fuzzy one on the cover standing behind Lex Luthor, who’s the bald fellow in purple on the right, standing behind the guy who appears to have turned up for the fight in his pyjamas). The monster is apparently trying to destroy a town so Superman attacks the monster and flings it away into space.

So, the monster didn’t mean to cause any damage: the extra oxygen in Earth’s atmosphere made him go a bit loopy.

Turns out the monster has come to Earth from his home planet of Valgor — which has recently been conquered by evil aliens — because he’s searching for Superman to help his people. Lucky for him that he ended up in this book, then, and not in Captain America: The Great Gold Steal, because good as he is, Captain America just doesn’t possess that kind of power.

Superman is mildly suspicious that the monster might be telling fibs, so readers now have the option of choosing whether Superman should to take the monster to the Fortress of Solitude so Supes can use his lie-detector, or just trust the monster and head off to Valgor.

Page 25. Superman and the yellow fuzzy monster reach the planet of Valgor on the rim of the galaxy less than an hour later, thus demonstrating the sort of speed that would make Elon Musk openly weep with pure envy.

Valgor has been devastated — crumbling buildings, howling winds, barren landscape, insert Brexit joke here — but there is still life… A band of approaching creatures approaches, approachingly, and the yellow monster informs Superman that they are friends.

Now we’re told to turn to page 96. No option to go elsewhere. So, as I secretly predicted, this isn’t really a fully open-world adventure like, say, Skyrim or Grand Theft Auto or reality; there’s a limited number of paths we can take. Tch. I was kind of hoping I could get Superman to fly past my office window so I could look in and see myself typing this.

Page 96. The approaching approachers are rebels, led by their leader, Lektor. Uh oh. Superman, you’d wanna watch out for this guy. Lock him up the minute he starts talking about fava beans or complaining about the needlessly-altered spelling of his name in his first movie.

Lektor tells Superman that the devastation of Valgor was caused by the Paralytes, which on this world are not the diet hang-gliders their name might imply, but alien invaders. Lektor wants Superman to help the rebels fight the Paralytes. Superman, being a man of peace as well as steel and tomorrow, suggests negotiation, but Lektor’s not interested in that. It’s war or nothing for him.

Time to dig out the coin again, folks. Caesar says the Superman joins the rebels, jug/snakes/axe says that he tries to make peace with the Paralytes.

Flip… Oh, come on! It’s jug/snakes/axe again! Is this coin faulty or something? Hold on, I’ll try a few test-flips… OK, after ten test-flips it came out Caesar six times and jug/snakes/axe four times. So at least I know that the coin can land Caesar-side-up.

Anyway. Off to page 98 to try to make peace with the Paralytes.

Page 98. Superman goes to the planet’s capital to talk to the Paralytes’ king, King Vidas. Unexpectedly, King Vidas apparently isn’t as war-mongery as Lektor has led us to believe. He takes Superman’s arguments on board and agrees that peace might indeed be possible.

But then the evil wizard Carnus bursts in to tell King Vidas that Superman can’t be trusted and must be destroyed (we know that Carnus is an evil wizard because the text tells us so). Armed guards appear, and we have a choice to make…

If the coin reveals Caesar, Superman will attempt to fight the guards. Otherwise he’s going to continue arguing for peace.

Drum roll please…. And it’s Caesar! Yay! The coin probably isn’t broken, or biased! (Or haunted, which was my unspoken fear.) Off we go to page 79! 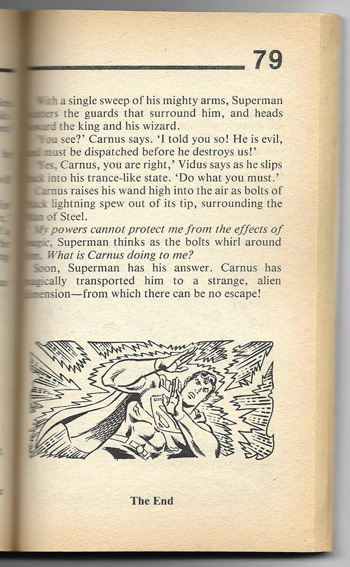 Superman easily defeats the guards, but this violent action only convinces King Vidas that the evil wizard Carnus was telling the truth: Superman is dangerous.

Carnus performs some of his evil wizardry and Superman is transported to another dimension — from which there can be no escape!

It says so there, on the right. Look:

That’s the game over. Bit short, wasn’t it? And a bit disappointing that we lost, too.

I say “we” but it was my battle-eager coin that told Superman to fight the guards at the end. If I’d been in control, I’d have attempted to talk rather than fight, because I’m a humanitarian and a coward, and the adventure would have gone on a little longer.

However, that’s actually one of the strengths this particular game-book has over many others. The standard model is to present the reader with many different paths that all ultimately lead back to the same ending. The writer often only gives the illusion of choice. A bit like asking a child, “Do you want cauliflower? Or cabbage?” and then telling them that it’s their fault that they didn’t like their dinner.

Superman: The Man of Steel is different in that the player’s decisions at the start determine which of several different adventures will take place. If at the very first decision our coin had told us to go to the Daily Planet instead of another city, we’d have ended up battling Lex Luthor.

Y’know something? All facetiousness and snide remarks aside, I reckon this is a pretty good book. It’s light on text and one or two of the adventures could benefit from a bit more of a polish, but the idea is solid and well-executed, and the illustrations are very good. I would have loved this a pre-teen, and even older Superman fans would get a lot of fun out of it. Overall the package is strong enough to induct a newbie into the world of Superman. Never a bad thing, that.

*Depending on whether you’re reading this before or after I’ve posted said feature.

4 thoughts on “Noncomics: Superman: The Man of Steel – A Which Way Book”

A World Of Ideas