In the late 1970s, uncoincidentally around the time Star Wars was released and gave science fiction a massive boost in popularity, KP Snacks released Outer Spacers. Subtitled “Crispy Corn Snacks for Cosmonauts” these were cheap but tasty fried snacks — sort of a sci-fi version of the more famous Monster Munch — available in a variety of unusual flavours: “beefburger,” “pickled onion” and “chutney.”

Well, those flavours were unusual to us back in 1970s Ireland, where crispy things traditionally came in only two flavours: “cheese & onion” or “salt & vinegar” (on very special occasions we could get “smokey bacon,” and sometimes “ready salted” for the more discerning gourmet). Pickled onions were much more of a British thing, beefburgers weren’t all that common back then (we had rissoles: remember those?), and no one knew what the hell a chutney was or what we’d even do with one if we caught it. 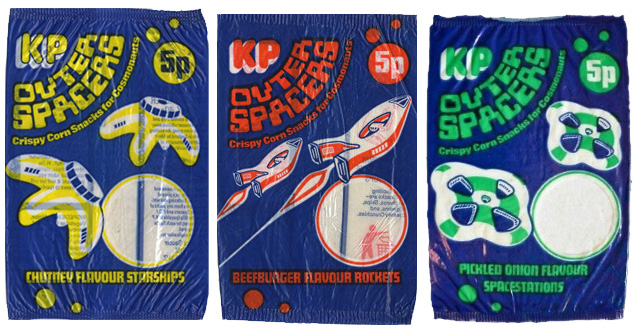 Outer Spacers were 5p per bag at a time when most comics cost around 10p, so looking back I can’t see why I ever bought the things — tasty as they were — because for every two bags of Outer Spacers I chose to buy, I could instead have had a new comic. Comics last a lot longer than crispy things, and you can consume them more than once.

Outer Spacers were advertised pretty heavily in the British comics, with a lot of promotional giveaways of the “send away X empty bags (plus postage) in exchange for this free thing” variety. Their campaign for Star Wars kites, below, was not quite tempting enough for me. Partly because it wasn’t actually free — 95p was a lot of money in those days, enough to buy nineteen bags of Outer Spacers, which in turn is enough to make you barf your guts up if you devour them all in one sitting — but mostly I didn’t bother because of the famous mathematical equation kites = meh.

However, I was particularly keen on their set of three giant Space Posters. Keen enough that I actually went for it. Unfortunately, I’ve not been able to find an ad for the posters in any of my comics, but here’s a photo of the relevant bags…

I rarely had the patience to collect enough box-tops or bags or tokens or whatever for stuff like this, but I really, really wanted the posters so I persevered… I don’t actually remember collecting the bags or sending them off, but I still have the posters so I must have done it.

The posters are not bad at all for free stuff, being on good quality paper and very large. How large? Well, maybe not big at all compared to space itself, but they’re considerably larger than the bed of the A4-sized scanner I used to scan them (a lengthy process that was somewhat alleviated by a handy trick I use when scanning large images).

To properly answer the “How large?” question: each poster is about 76 x 50.5cm. That’s about 30 x 20 inches, for those of you who are still doggedly adhering to those outdated Imperial measurements… just like the information on the posters themselves.

Forty-two years on, a lot of that info is now out of date… most glaringly, Pluto is listed as one of the planets in our solar system.

The whole debacle — nicknamed “Plexit” by the media — triggered endless debates on TV and protests on the streets and the like, but they all came to naught. Austerity, you see. Yeah, there’s enough money for those fat-cat politicians in government to fly to their gala openings in their fancy leather-lined junkets but somehow we could only afford eight planets? Tch.

The third poster, above, is the one I really wanted. Not only does it feature Doctor Who, Star Trek and Space 1999, it also has the original Dan Dare! I was very familiar with Dare’s 2000AD incarnation but didn’t know a lot about the version presented here, as he appeared in Eagle from 1950 to 1969. Here’s a close-up of that panel…

Sadly, there are no art credits on any of the posters, a real shame because they are fantastic pieces of work. They adorned my bedroom walls for many years and even survived being stored in a succession of musty attics and dodgy apartments.

Outer Spacers continued to run similar offers — and even ran one campaign featuring comic-book art by the late, legendary Frank Langford (right) — but in my opinion they peaked with the Space Posters.

The snacks were later relaunched as Alien Spacers, and then sort-of reinvented as Space Raiders, but by then the magic had gone. I did hear a rumour a few years ago that Outer Spacers were making a return, but sometimes if a change is big enough, it cannot be undone.

Like our much-missed ninth planet Pluto, Outer Spacers have been lost to us forever. (Unless, of course, I’m completely wrong and they are still available: I’m 52¾ years old: it’s been a long time since I last prowled the crisp aisles of the local supermarket.)

Update 20190128: There must be something in the air! Two of my favourite comic blogs have recently featured articles about the KP Alien Spacers adverts that appeared in British comics in the 1980s… I urge you to check out Richard Sheaf’s Boys Adventure Comics blog and John Freeman’s Down the Tubes blog — both of which are utterly indispensable and always entertaining!