From the distant past of 1979 comes a Star Trek colouring book — but this is not just any old colouring book. This is no mere random collection of line-art images: every page in Star Trek – Planet Ecnal’s Dilemma is actually a panel in a continuous story (or half a panel, for the two-page spreads). So it’s almost a comic book, but not really, and as such it fits quite neatly into the Noncomics category.

The story: Once upon a time in a galaxy that’s this one but in the future, the USS Enterprise space-trundles along to the planet Ecnal where the inhabitants tell them that all the plant-life is dying. Captain Kirk and his plucky pals discover that an alien spaceship has been stranded on Ecnal and its crew’s attempts to replenish its fuel are killing Ecnal’s plants. The aliens — a cat-like race called Lerows — are kinda hostile and decline the Enterprise crew’s help.

I won’t spoil the ending, of course. I’ll save that little treat until the end of this article and spoil it then instead.

The book is 20cm x 10.5″ (or 8″ x 27cm, if you prefer), with card covers (nothing printed on the inside covers, and the back is pretty much the same as the front but without the title text) and forty-eight interior pages. Of those, one is the title-page (below), and fourteen are given to double-page spreads, making a total of forty separate panels. Sadly, the interior pages are of pretty low-quality paper that’s far too absorbent for a colouring book, as you can see from the aforementioned title page:

That jagged blue aura sneaking up on the Enterprise’s first officer isn’t an alien attempting to take over his mind, or invade our universe from another dimension, or impregnate him with its rapidly-gestating offspring that will grow from a child to an adult in less than two days. It’s actually ink seeping through from the other side of the page… 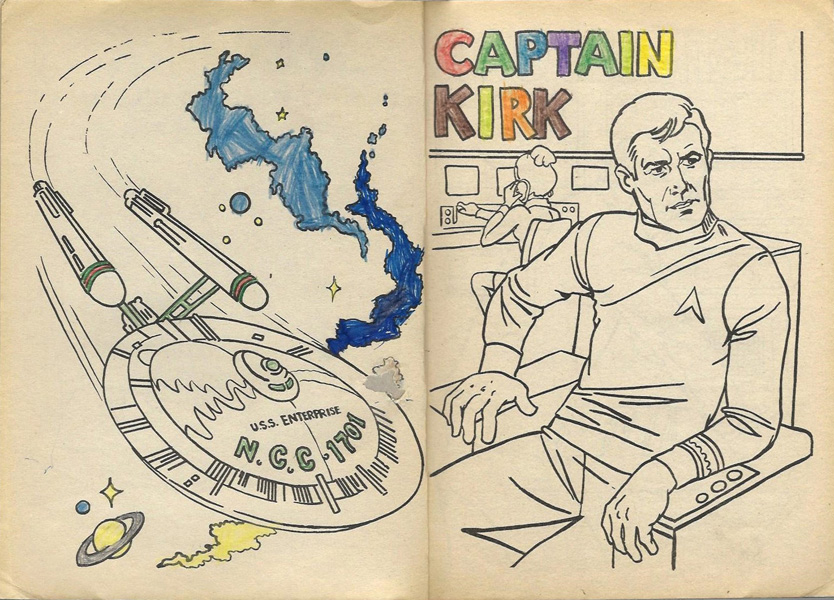 Like the script and the art in this book, the colouring is uncredited, but whoever the colourist is, this is as much as they’ve done — every other page is untouched. Probably just as well, because the colour-seeping problem means that you can only colour one side of any given page if you’re using markers. Wax crayons or coloured pencils would probably be fine, but the former are messy and the latter really need pure white paper to work.

As you can see from Kirk on the page above, the artwork is adequate, but only just: that’s actually one of the book’s better drawings. Overall, the art is inconsistent, which is almost worse than just being bad.

However, I do like that Kirk and the rest of the main cast are introduced almost in the manner of a TV show’s credits. 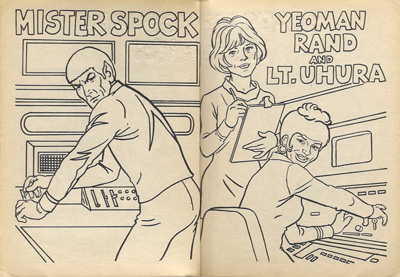 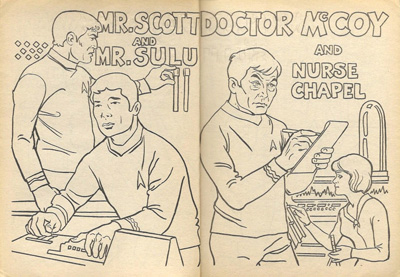 And then we get straight into the story itself… 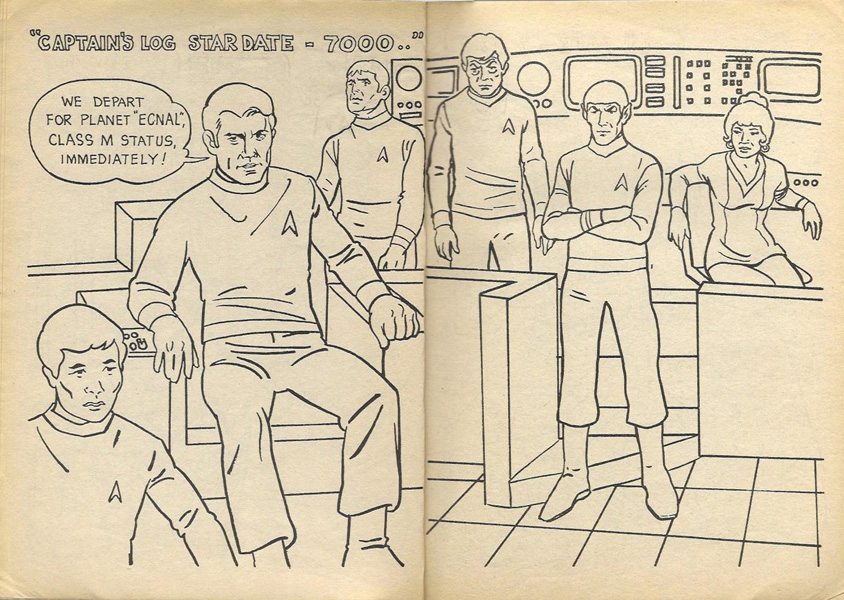 Despite the stardate of 7000 (which doesn’t really matter because during the original series the writers were picking stardates at random), we can assume that this story takes place around the time of the first season because Yeoman Rand is present and Chekhov isn’t: the former only appeared in season one, the latter only in seasons two and three.

That web-fingered character is an unnamed Ecnalian who explains the planet’s dilemma to Kirk. He looks like he might be amphibious, but, hey, who am I to judge? Over the following pages, we see the crew examining the planet’s flora and fauna.

Here they are with the shuttlecraft Galileo in the background, which presumably they had to send for, given that they’d teleported down to the planet.

The book’s sole action scene comes when the Enterprisians carry a giant crystal prism (that they got from somewhere unmentioned) to the Lerows’ ship. The Lerows shoot at the prism, and it reflects their energy beam back, even though prisms really don’t work that way…

… and the energy beam recharges the ship’s engines. The grateful Lerows present Kirk and the Ecnalian with flowers from their planet that was “once-lovely” until the “killing rains” came. This crew of Lerows had been sent out into the galaxy to find a solution.

Kirk, being a very special kind of genius, concludes that if an oversized transparent Toblerone box can somehow magically recharge an alien ship’s depleted fuel cells then, logically, it should also help the aliens’ stricken planet.

And then the Lerows fly home. The end.

My edition of Planet Ecnal’s Dilemma was published by Golden Acorn Publishing in the UK in 1979, a year after its publication by Whitman in the USA — which explains the spelling of “Coloring” on the cover and title page. A comprehensive list of Trek colouring books and similar items can be found on the very useful Star Trek Comics Checklist, including the reprinted edition on the right with its brand-new cover, and new logo to tie it in with Star Trek: The Motion Picture.

As a comic book, it’s not good. And it’s only marginally better as a colouring book… the pics are just too dull and samey. Sure, the cover is great, but that probably wouldn’t have been enough to pique my interest back in the day.

Forty years on, it’s not nearly as hard to find Star Trek material as it was then, so any novelty this might once have had has long since gone the way of that absolutely huge bag of crayons you remember owning as a kid but lost somewhere along the way.

But… suppose we give it a shot anyway. I currently own zero crayons, but I do have Photoshop, which is a lot more useful and infinitely forgiving. Let’s take a stab at the page where the Lerows express their gratitude…

And finally — because I don’t want to finish on something as crass as a piece of my own work, which would be shameless self-promotion — here’s the colouring book’s unadorned back cover: