It is a universally accepted truth in fiction that heroes need villains, and darkness needs light. And just like every rose has its dawn and every night has its thorn, one of the most persistent thorns in Judge Dredd’s side is his long-time arch-nemesis Judge Death. Hailing from a dimension where it’s been decided that life is a crime (on the basis that only the living commit crimes), Judge Death first appeared in 2000AD #149 (26 Jan 1980) in a three-part strip written by John Wagner and drawn by Brian Bolland.

Judge Death was an instant hit with the readers, and it wasn’t long before he returned in a five-part strip, “Judge Death Lives” starting in 2000AD #224 (8 Aug 1981). Actually, that’s not true. For those of us who actually lived through those times, it was long before Judge Death returned. Far, far too long. Over a year and a half of deathless progs. That might not seem so much time now, but let’s look at the numbers… I was about 5,053 days old when the first Judge Death strip appeared, and would have to wait a further 560 days — or 11.08% of my age to that date — before until the sequel finally turned up. That’s the equivalent of present-age me having to wait 2173 days… or six years, minus a couple of weeks off for good behaviour.

Death has since become almost as much of a star in 2000AD as Dredd himself, featuring in many solo adventures. He’s a big enough villain to not only have Joe Dredd as his nemesis, but also the redoubtable Judge Anderson of Psi-Division. He even went toe-to-toe with Batman in the classic Judgement on Gotham crossover (1991, written by John Wagner and Alan Grant, and painted by Simon Bisley).

Anyway… Skipping ahead a few decades, we land on the point of today’s oddity… A Judge Death mask produced in 2014 by the publicity droids at 2000AD to promote the then-upcoming Dark Justice series… 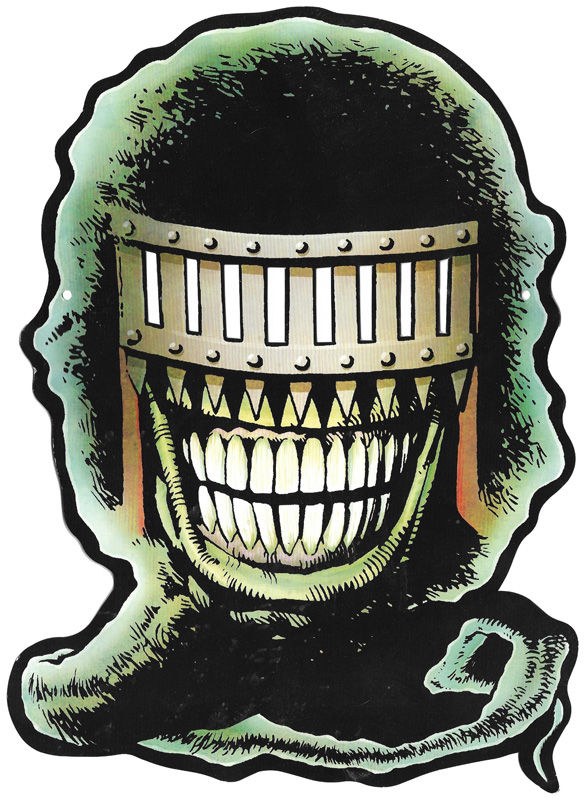 The mask — made of the finest thin card and featuring wee holes at the sides through which a length of elastic was threaded (in order to secure it to one’s face, or indeed to someone else’s face) and a punched-out portcullis (so that the wearer might be able to see through it) — is about 230mm across and 310mm high, and features Death’s disembodied ghostly head as depicted by Brian Bolland in episode 1 of “Judge Death Lives,” albeit with some colour added and its ectoplasmic “tail” tweaked a little…

The mask also boasts some handy info on the back:

That’s Greg Staples’ fantastic rendition of Judge Death there… Sadly, it’s only printed in monochrome on the mask, but because I’m awesome I’ve gone to the trouble of tracking down a colour version of that same image:

The text on the back of the mask is hard to read at the resolution I’ve chosen to save the image, so here it is in zoomed-in mode…

As I recall, I acquired my Judge Death mask from the 2000AD booth at the San Diego Comic Con in 2014, where they were much sought-after. Plus Mrs Rusty and I had the enjoyment of watching a pair of four-year-old twin girls attempting to use their massively oversized Judge Death masks to frighten their parents… who’d given them the masks only a few minutes earlier.

The masks were also given away at many other conventions where the 2000AD droids plied their wares, so they’re not extremely rare, but they are definitely worth seeking out: they show up from time to time on Ebay and similar sites. They make cracking good posters, too!

Bonus item! Another nifty 2000AD booth giveaway is this double-sided door hanger (90mm x 200mm) featuring an ad for Abaddon Books (a book-publishing imprint of Rebellion, 2000AD‘s parent company) on one side, and Judge Dredd caught at an inconvenient moment on the other…