Film Threat was an American magazine that focused primarily on independent movies: the sort of movies that might only barely get a mention in the more mainstream press. It began in 1985 as a self-published zine created by Chris Gore and André Seewood but it was so successful that it became a “proper” magazine from issue #9. It was eventually retired in 1997 but lives on today as a website.

It wasn’t easy to find copies of Film Threat on this side of the Atlantic: I only possess a couple of issues. The October 1994 issue, though, was an absolute must-buy as it features (as the cover suggests) the now-infamous unreleased 90s Fantastic Four movie… It’s a hefty 16-page article packed with background info, behind-the-scenes photos, interviews with the cast and crew, etc. 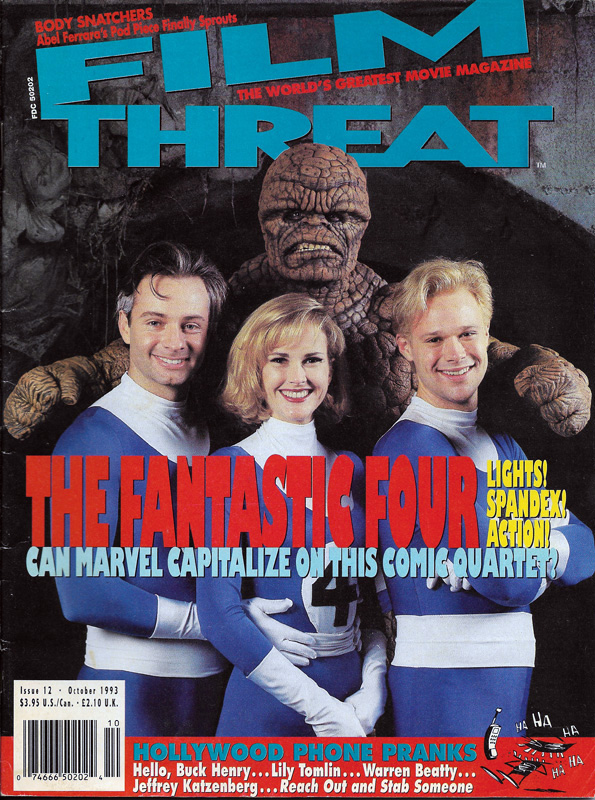 Directed by Oley Sassone, produced Roger Corman and starring a cast of talented but then little-known actors, most of whom have gone on to remain little-known, The Fantastic Four was rushed into production in order to retain the rights. Apparently the contract they’d signed with Marvel had a clause that stipulated that the rights would revert to Marvel if the movie wasn’t completed by a certain time… This is why subsequent Fantastic Four movies have been produced by Constantin Film, the company that co-owned the rights with Roger Corman.

I’m not going to reproduce Film 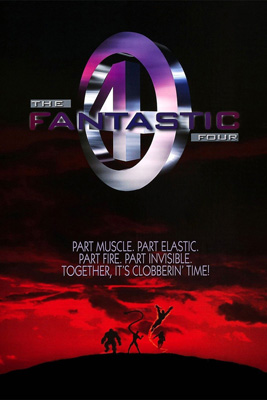 Threat‘s sumptuous article here: that would be outside the scope of this website and I’m sure you can find it on-line without much trouble. But I will tell you that it’s massively optimistic about the FF movie, and I can’t blame them for that. After all, this was only a few years after Tim Burton’s first Batman movie heralded the modern age of superhero adaptations. The article ends with “The Fantastic Four is tentatively scheduled to open Labor Day at a theater near you.” Labor Day, for the non-Americans, is the first Monday in September. It has nothing to do with babies, apparently. Anyway, Labor Day came and went without any sign of The Fantastic Four movie being released. And so did the following Labor Day, and the one after that…

For a while there were rumours that the movie actually had been released, unannounced, in two small, remote cinemas in the USA on Christmas Day: the purpose of which was that the producers could then claim that the movie had been released before their rights expired, thus they were entitled to renew the rights. Another entertaining but equally dodgy rumour had it that the movie’s world premier had been scheduled and booked to take place at a fancy cinema in Minnesota in January 1994: the actors and crew turned up only to discover that Roger Corman had sold the movie to another company and there wasn’t even a print to show at the premier.

The truth is that movie has never been officially released in any form, although bootleg versions are pretty easy to find on-line. The picture quality isn’t very good, but it’s clear enough to see that the movie itself isn’t very good either. But trust me when I say that’s not for want of trying: Yes, it’s silly and cheap — at one point Mister Fantastic’s stretching powers are represented by a glove on a stick — and it hasn’t aged nearly as well as Marvel’s other 1990s movies The Punisher and Captain America, but it’s still pretty good fun, which is a lot more than can be said for the breathtakingly dull 2015 Fantastic Four movie.

Trivia: Alex Hyde-White, who plays Reed Richards / Mister Fantastic also showed up as Young Man in the 1979 TV movie Captain America II: Death Too Soon. (However, he’s not the first actor to have appeared in more than one Marvel adaptation: that was Nancy Everhard who in 1989 featured in both The Trial of the Incredible Hulk and The Punisher. So there.)

Also: this movie’s version of The Thing (AKA Ben Grimm) is by far my favourite live-action rendition, even though the subsequent versions — foam costume for the 2005 version, CGI for the 2015 version — probably cost more to put on screen than this entire movie. Same goes for the Doctor Doom costume: the 1994 version looks so much better than the later attempts. And the same is true of Doom’s character: the more expensive movies try to make Doom a better match for the FF by giving him superhuman powers… thus proving that they fundamentally failed to understand what made Doom such a good villain.

If you want to know more about the first Fantastic Four movie — and you do, because the story behind the story is a fascinating glimpse into the movie-production process — track down a copy of this issue of Film Threat, and also check out the excellent 2015 documentary Doomed which does a great job of detailing the history of the whole wonderfully well-intended mess.

...from a Sloperian point of view.