You might even have thought that the information about those comics seemed… a tad confusing, inconsistent, incomplete, contradictory or almost completely absent, or some combination of any or all of that lot.

Well, I’ve done megaheaps of research into those comics over the past few years and I think I’ve managed to clear up a lot of the confusion… Though not all of it. There are still some infuriating holes in the overall picture that I’ve been unable to fill.

If you can help fill those holes, or if you spot any major errors or omissions, please do let me know. (Caveat: much of the information here comes from the British Library, including publication dates… which might not exactly match up with the cover dates or other dates listed on other comics websites. Again, that’s another source of confusion!)

So let’s roll up our shoes and kick off our sleeves and just dive in, shall we?

The main confusion lies in that we’re talking about two separate publications from the same publisher — Amalgamated Press. Both of those publications were subject to a number of relaunches and name-changes throughout their lives, but for clarity I’m going to treat them as only two publications…

The Funny Wonder #1 – #109 (4 Feb 1893 – 25 May 1901)
Often referred to as Funny Wonder New Series on comics websites. The issue-count (from the British Library, among other sources) is definitely incorrect: this run of the comic lasts over eight years: by my reckoning, it should have clocked up around 433 weekly issues. It’s possible that at some point the publishers reset the issue number when they incremented the volume number, hence the final figure of 109.

Wonder and Jester #26 – #27 (10 May 1902 – 17 May 1902)
With this new title, collectors would be forgiven for thinking that Wonder has merged with a comic called Jester, but I’m pretty certain that’s not the case: I’ve been unable to find any comic with “Jester” in the title that matches the dates. (There was a Jester that was published for four issues from 23 February to 16 March 1889, and another with a six-issue run in 1901, but neither of them are close enough, nor were they published by Amalgamated Press.) 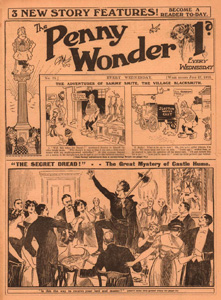 Funny Wonder #41 – #1365 (2 Jan 1915 – 25 May 1940)
After three years the comic finally settles down with a proper name, which it stole from its older sibling in order to torment future comic collectors. It holds onto this name for the next quarter of a century.

So there you have it! All clarified and sorted out and perfectly neat and tidy, except for the dreaded huge holes in the data. 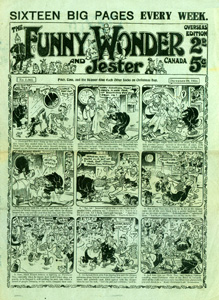 One fairly major point of confusion is that for a time in the 1930s — before the two titles merged — there was an overseas edition of Funny Wonder and Jester that combined both into one sixteen-page publication, as seen on the right. These editions contained no new material other than the new logo on the cover, which featured the price in pennies as well as cents. They crop up a lot on auction sites, and can be easily identified by the text across the top: “Sixteen Big Pages Every Week.”

Collectors should take note that there have also been facsimile reprints of Funny Wonder and Jester (and other comics of the era), as covered by comics creator and historian Lew Stringer on his excellent Blimey! blog.

After all that, you might be wondering (or even funny wondering, har har!) what this all looks like on a handy time-line. Well, wonder no longer, chums…!

(Click on the image for a larger, readable version!)

(Unfortunately, I’ve not been able to find covers for every one of the comics’ incarnations, but I intend to keep searching!)

As mentioned above, please do let me know if you can supply some of the missing data, or if I’ve missed anything important or made any serious and demonstrable errors. I honestly don’t mind being corrected: as all research should be, this is an expedition to find the truth rather than a crusade to confirm an established theory!

20200104: Collector John Pollock sent me a photo of Funny Wonder and Jester from 24 May 1941, smack in the middle of the “Unknown” period — thus proving that the comic did exist at that time, and allowing me to not only fill in that gap, but also to combine the periods before and after, as you can see in the revised timeline above.

7 thoughts on “The Mysteries of Wonder!”