Among the comics whose anniversaries we’re acknowledging this month is a rarity indeed: a British boys’ comic that’s named after a female character. There’s a prize of nine points for anyone who can guess what it is without checking! (Yes, I know, the standard prize is ten points, but these blogs ain’t cheap to run, so there’s a kickback. Sorry, but that’s just the way we do business now at Rusty Towers.)

25 years ago:
February – Manga Heroes (Manga Publishing, Feb 1995 to May 1995, 4 issues) launched.
A monthly title that reprinted some classic Manga, including GenoCyber, Appleseed, and Dark Horse’s adaptation of TimeCop. Sadly only lasted for four issues.

17 February – Biker Mice from Mars (Marvel UK, 17 Feb 1995 to 12 May 1995, 7 issues) launched.
This is one of the more elusive Marvel UK comics, and if it wasn’t for the fact that I have scans of all the covers I’d almost be tempted to think that I’d just imagined it. I’m not familiar with the cartoon upon which it’s based but I’m told it’s great fun.

24 February – BVC – Big Value Comic (IPC, 24 Feb 1995 to Nov 1995, 18 issues) launched.
The exact number of issues of this title has proven difficult to pin down. It was effectively a replacement for defunct IPC reprint titles like The Best of Whoopee!, The Best of Buster, The Best of Whizzer and Chips (see below), Funny Fortnightly, etc., and itself was replaced by the short-lived monthly title Buster Classics in 1996.

10 February – Original Sylvanian Families (Marvel UK, 22 Oct 1988 to 10 Feb 1990, 27 issues) final issue.
I don’t see the appeal of these little inaction figures — dead-eyed anthropomorphic animals in dungarees standing in their tiny gardens surrounded by picket fences — so I really can’t see why a comic about them would be of any interest to anyone, but then I’m not a little kid. My own children, Tesseract and Pineapple, never had an interest in this sort of thing, but perhaps they might have, if they hadn’t been imaginary. (Uncle Rusty’s Top Parenting Tip: if you want to save a huge amount of money and help the environment, imaginary children are definitely the way to go!)

17 February – Strip (Marvel UK, 17 Feb 1990 to 10 Nov 1990, 20 issues) launched.
One of those comics that should have lasted a lot longer than it did. Strip was a fortnightly anthology aimed at older readers and containing highly-regarded content, including Marshal Law, Genghis Grimtoad and Death’s Head. No direct connection with the similarly-titled comic launched in February 2010.
Update: John Freeman provides a more detailed look at the original Strip over on his site, the exquisite, essential and eternally entertaining Down the Tubes!

35 years ago:
February – The Best of Whizzer and Chips Monthly (IPC, Feb 1985 to May 1992, 58 issues) launched.
Does what it says on the tin! Back in the 80s there wasn’t nearly as much of a market for old comics as there is now (no Ebay or on-line stores, very few conventions) so reprint comics like this were by far the easiest for readers to check out some old classic strips.

23 February – Nikki for Girls (DC Thomson, 23 Feb 1985 to 09 Sep 1989, 237 issues) launched.
A girls’ title that didn’t do much to stand out from the crowd, aside from its secondary-school strip “The Comp.” The comic was of course named after the pop star Nik Kershaw who was massively popular at the time and who’s still going strong today. (Actually, I just made that up, but Nik Kershaw is bloomin’ brilliant and puts on a fantastic show. Mrs Rusty and I have been to see him three times in the past few years!)

40 years ago:
02 February – Cheeky Weekly (IPC, 22 Oct 1977 to 02 Feb 1980, 117 issues) final issue: absorbed into Whoopee!
I really loved this comic. It was silly and packed with daft jokes and wicked puns, and in my view it far surpassed its progenitor, Krazy. A few of the jokes and characters haven’t aged tremendously well, but it was a very inventive comic and entertaining enough that we didn’t really notice that Cheeky’s teeth defy the laws of perspective by always being much larger on the far side of his face than on the near side.

14 February – Nutty (DC Thomson, 14 Feb 1980 to 14 Sep 1985, 292 issues) launched.
One of fun things about these Hatch, Match & Dispatch lists is that it throws pieces of data together that might not otherwise meet… For example, until now I hadn’t realised that Nutty had been launched so shortly after Cheeky Weekly‘s demise, as though the universe couldn’t abide the loss of a very silly comic and created another one to fill the void. While Nutty wasn’t perhaps quite as off-the-wall as Cheeky Weekly, it did give the world Bananaman.

23 February – Speed (IPC, 23 Feb 1980 to 25 Oct 1980, 31 issues) launched.
As the title suggests, all the stories within were based around the idea of things going fast. I remember rather enjoying it at the time, but the only really stand-out strip was “Death Wish,” about a stuntman who’s been badly scarred in an accident and starts to take greater and greater risks because he no longer cares what happens to him. “Death Wish” was popular enough to survive Speed being absorbed by Tiger and Tiger subsequently being absorbed by Eagle.

45 years ago:
February – Vampirella (IPC/Warren, Feb 1975 to May 1975, 4 issues) launched.
An adult comic that I would not have been allowed to buy because I was only nine years old. And yes, Vampirella is the comic mentioned in my preamble above that was aimed at males but is named after a female character. Can you name another one? There’s a further nine points in it for you if you can! Note: Cheeky Weekly predates The Cheeky Girls and therefore doesn’t count. Neither does Doctor Who because the character wasn’t female when the comic was created. (And anyone who suggests Bimbo will actually have points deducted.)

08 February – Mates (IPC, 08 Feb 1975 to 29 Aug 1981, 342 issues) launched.
A teenage girls’ magazine that included a number of photo-stories, so by my criteria it does count as a comic (it might even have had traditional drawn comic-strips, but I can’t verify that right now). It absorbed its older sibling Pink in 1980 before being in turn absorbed by Oh Boy. It’s part of the My Guy family tree.

14 February – The Wizard (1970) (DC Thomson, 14 Feb 1970 to 25 Jun 1978, 435 issues) launched.
The relaunched version of one of DC Thomson’s classic “Big Five” titles. Its forebear, cancelled seven years earlier, was a story-paper, but this version was very definitely a comic — although it still ran text stories for a while. True story: sometime in the early 1970s I was stuck at home with a rotten flu and very much down in the dumps. My mother was preparing a shopping list for my older sister (this was in the days when it wasn’t considered dangerous to allow children to go to the shops on their own) and asked me if there was a comic I wanted to cheer me up. I asked for Whizzer and Chips, but my sister must have misheard me because she came back with a copy of The Wizard. That was the first time I’d ever looked at that comic, and I don’t remember the contents now, but I do remember that I really enjoyed it.

February – New Funnies (Swan, Feb 1940 to Jan 1951, at least 42 issues) launched.
The first comic published by Gerald George Swan, a man apparently cursed with an allergy to calendars, judging by his lack of cover-dates or any form of regular publishing schedule. But in a time when a lot of publishers were killing off their titles because of war-time paper shortages, Swan was doing the opposite: in 1940 he launched seven new titles. 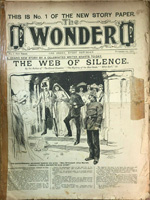 18 February – The Wonder (1901) (Amalgamated Press, 16 Nov 1901 to 18 Feb 1940, 1996 issues) final issue: absorbed into The Penny Wonder.
You know, chum, sometimes your Uncle Rusty finds it hard to shake the feeling that everything on this blog comes back to The Wonder and its annoyingly-similarly-named sibling… See my extensively-researched article on the subject: The Mysteries of Wonder!

01 February – Realm of Fun and Fiction (Amalgamated Press, 16 Feb 1929 to 01 Feb 1930, 51 issues) final issue.
The last in a long chain of titles that began with Pluck in November 1894, which was relaunched ten years later, then absorbed by The Boys’ Realm in 1916. The Boys’ Realm relaunched and renamed itself a few times before ending up as Realm of Fun and Fiction, a year before being again relaunched, this time as Screen Stories (see the very next entry, below).

08 February – Screen Stories (Amalgamated Press, 08 Feb 1930 to 17 Aug 1935, 289 issues) launched.
As mentioned above, this was a relaunch of Realm of Fun and Fiction with a new focus: prose adaptations of then-current movies. Such things were all the rage for a while, which might seem odd nowadays, but when I was in my early teens I bought an awful lot of movie novelisations and comic adaptations, which were pretty much the same thing.

(A note from Uncle Rusty: these lists are fairly time-consuming to create, so if you like the feature please do spread the word so I’ll know it’s not just me who’s interested in this sort of thing!)